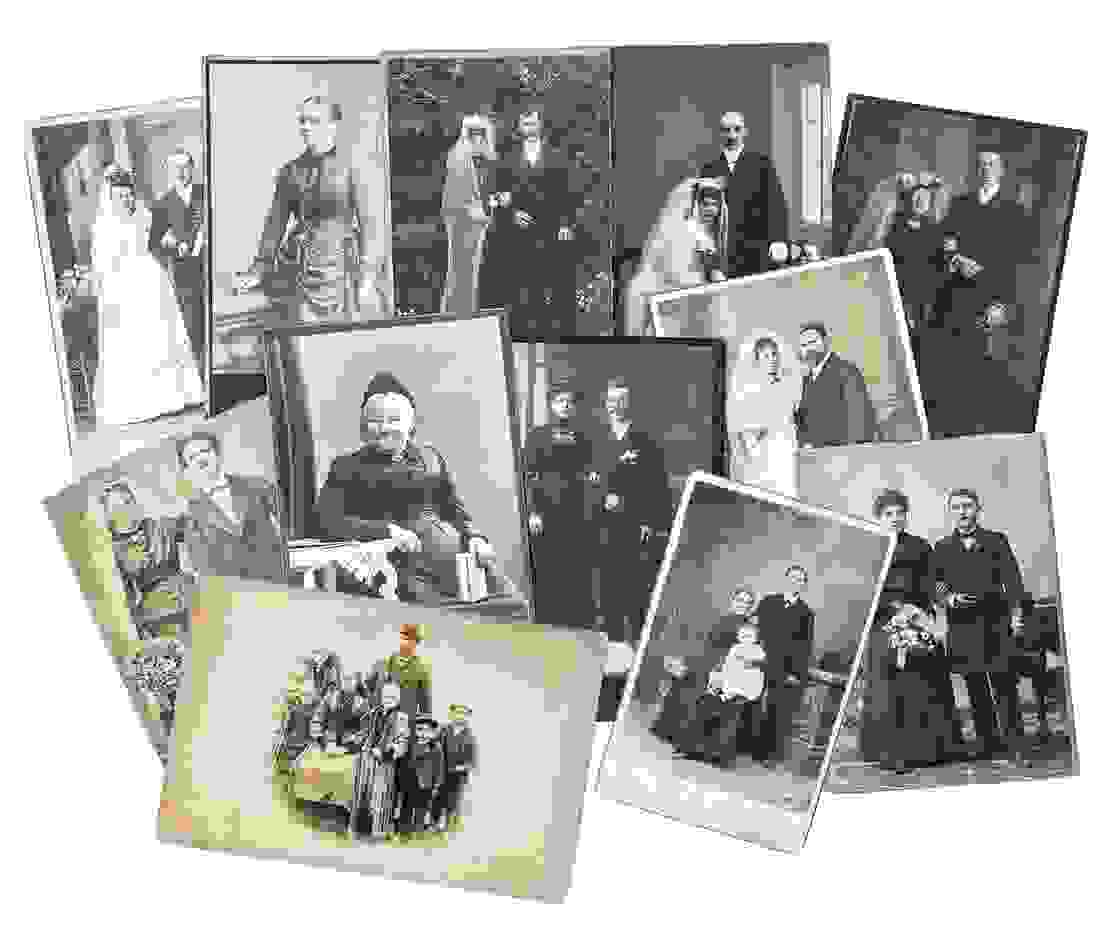 The following family members are covered in more detail in my book:

Beyond Wallerscote Manor: The Littler Family of Cheshire, England

Confusion arises in the early 17th Century with three Williams baptised in the same timeframe and in close proximity to each other—and two of them directly linked to Wallerscote Manor:

1. Taking them in order, the first William is the son of Ralph Littler (Sr) of Wallerscote and his third wife Anne Bromley, who married c.1602. William was baptised in 1604 at Weaverham St Mary and possibly married Margaret Winnington in 1629, at Witton St Helen (Northwich). They appear to have had five children including a son Richard, who unfortunately died in 1635, at the age of six years. A daughter Anne died the same year and it is unknown what became of the other three girls.

2. Our second William is the son of Christopher Littler of Great Budworth, also baptised in 1604. Although William was baptised at Great Budworth St Mary and All Saints, four of his siblings appear in the Witton St Helen registers—the family possibly lived in Barnton and St Helen’s was then a ‘chapel of ease’ to the main church in Great Budworth. William is also of the right age to have married Margaret Winnington.

3. Our final William is the son of Ralph Littler (Jr) of Wallerscote and Prudence Prestland, his wife. Their son William was baptised at Davenham St Wilfred in 1611. William, along with his brother Richard (and their father Ralph), is mentioned at the sale of Wallerscote Manor in 1636. After the manor was sold, Richard moved to a small estate in nearby Kingsley. William appears to have married and moved to a property in Barnton, where they had children. One daughter, Elizabeth, was baptised at Witton St Helen in 1636 and others may have been, but as parish records become intermittent during the Civil War they have been lost to us. A suggested son of William (also William, born c.1642) appears in the Great Budworth parish registers having children baptised between the years 1667-90. William Jr’s eldest child is a daughter by the name of Prudence, a given name that is rare in the Littler genealogy. She is thought to be named after her great-great-grandmother—Prudence (Prestland) Littler. A second clue that comes to us is that William (Sr), and his brothers Richard and Thomas, all appear as ‘gentlemen’ in the records: William at the baptism of daughter Elizabeth (1636); Richard at his burial in Frodsham (1669); and Thomas at his burial at Witton St Helen (1638). This suggested pedigree would show as: Ralph (married Prudence Prestland) > William (suggested son) > William Jr (father of ten children baptised at Great Budworth) > Prudence (eldest child of William Jr).

Confusion also rises with the number of sons by the name of Richard that appear during the late 16th Century and into the 17th:

2. Our second Richard is the son of Ralph Littler of Wallerscote and his second wife Mary Littler (of London)—they married there in 1591. Their son Richard married c.1619 and children begin to appear the following year, all baptised at Tarvin St Andrew. Of their five children, a son Richard (No. 5. above) married Margaret Cawley in 1648 and it is through him that I have linked my pedigree back to Wallerscote Manor. But do I have the correct Richard? As can be seen by the baptism dates, No. 1 Richard could just as easily be my ancestor.

3. Richard was the eldest son and heir to Ralph Littler (Jr) of Wallerscote. He appears in the records alongside his father and brother William at the sale of Wallerscote Manor in 1636. After the sale, he and his wife Mary moved to a small estate in Kingsley. It is believed they had children but no proof has been found to establish this. According to some American researchers, it is the descendants of Richard and Mary who settled in Pennsylvania during the late 17th Century. The lack of documentation during the time of Civil War in England (mid-1600s) makes it difficult to prove this connection.

4. Moving on to the next generation we come across a similar issue as numbers 1. & 2., where we find two Richards baptised less than three years apart and both at Tarvin St Andrew. Robert married Elizabeth Farrer in 1614 at St Andrew’s and their son Richard is of the right age and in the right place to have married Margaret Cawley in 1648.

5. This is the family I have identified as my pedigree: Ralph Littler (Sr) married Mary Littler > Richard > Richard, who married Margaret Cawley. Of their six children it is through their son William, who married Elizabeth Finchett in 1686, that my line continues.

All the Littler families above are people of means. George (son of John Littler) left significant property in his will; and Robert appears to be descended from a Robert Littler who died in Tarvin in 1578 and is noted in Burke (1843) to “have been a person of considerable importance from the large possessions which he left his son”.

To add to the mix above there also appears in the records (1627-39) Richard Littler the younger, Clerk in the Court of Chester, and, Richard, gentleman, son of Richard Littler, gentleman. Appearing a little later, in 1646-51, there also appears a Richard Littler of Mouldsworth, who was first compounded for delinquency during the Civil War, and secondly posted bond for the £100 debt he owed Richard Broster. It has been difficult to establish how these gentlemen fit into the known Cheshire baptisms.

There is documentation noting that Richard Littler of Mouldsworth is the cousin of Richard Littler of London (father of Mary Littler, who married Ralph Littler of Wallerscote—his second marriage). Richard was an attorney in the Court of Common Pleas in London and left a detailed will.

Thomas Littler is another gentlemen causing angst to researchers of our family, especially those endeavouring to establish a pedigree for the Waltham Abbey branch of the Littler family. Thomas is the patriarch of the family who became well-known silk and calico dyers/printers in Hertfordshire, during the 18th Century. He was born about 1690 and believed to have hailed from Tarvin, Cheshire. On searching the parish records for Tarvin St Andrew, two Littler children by the name of Thomas were baptised between the years 1675-1715. The first; Thomas, son of John Littler of Kelsall, was baptised in 1689 and married Mary Pinnington in 1713. He spent his life as a shoe-maker and aleseller in the hamlet of Duddon (Tarvin parish).

The second was Thomas, son of William Littler of Tarvin, baptised at St Andrew’s in 1691. In 1722, at the age of thirty, Thomas married Eleanor Wrench in the neighbouring parish of Tarporley. They lived in Tarvin where Thomas is noted as a yeoman. Of their six daughters only two lived to adulthood. Upon their deaths, both Thomas and Eleanor were buried in St Andrew’s.

The Thomas Littler in question lived in Cheshunt and was a solicitor admitted to the Court of Common Pleas in 1730. Confusion has arisen with him on two counts: his baptism has been erroneously linked to Tarvin St Andrew, and secondly, he was thought to have married Anne Durant, the illegitimate daughter of the Prince of Wales (later King George II). There is no proof that any of this is correct—the parish registers tell a different story. Thomas did in fact marry Anne Dauborn at The Fleet, London, in 1727 and their eldest child (Lewis) was baptised two years later at Cheshunt St Mary. Although they married in London, Thomas is shown in the register as ‘of Ware in County Hertford’ and Anne as ‘of Cheshunt in the County aforesaid’. I believe a concentrated search of the Hertfordshire parish registers may tell us where in the county Thomas was born. Littlers had certainly been in the county for many years—the earliest record I am aware of is a reference to Rondall and Margaret Lyttelore (Hertford 1486-1493) in the British Chancery Records, 1386-1558.